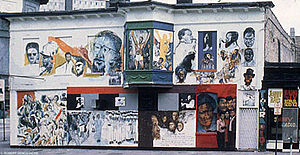 Wall of Respect, Chicago
The Civil Rights Movement was the decades long struggle by African Americans against discrimination, disenfranchisement, and segregation. Although its origins lay in the Reconstruction era of the 19th century, it achieved its greatest gains in the mid 1960s after years of direct action and protests. Like all protest movements, art was key to communicating its message: both as an articulator and as a protest tool. Artists worked both solo, and in collectives. One of the most successful of these was AFRICOBRA, which created an aesthetic philosophy which guided their work. Some of its members worked on the Wall of Respect, a mural at 43rd and Langley in Chicago's Bronzeville neighborhood. The group defined its missions as:

"an approach to image making which would reflect and project the moods, attitudes, and sensibilities of African Americans
independent of the technical and aesthetic strictures of Euro-centric modalities."

​The works created in this era transcended styles, ranging from realism to pop art, screen printing to installation. They used imagery that was both identifiable and provocative, making work which told the story of the movement and of the deep anger and frustrations felt by the community.